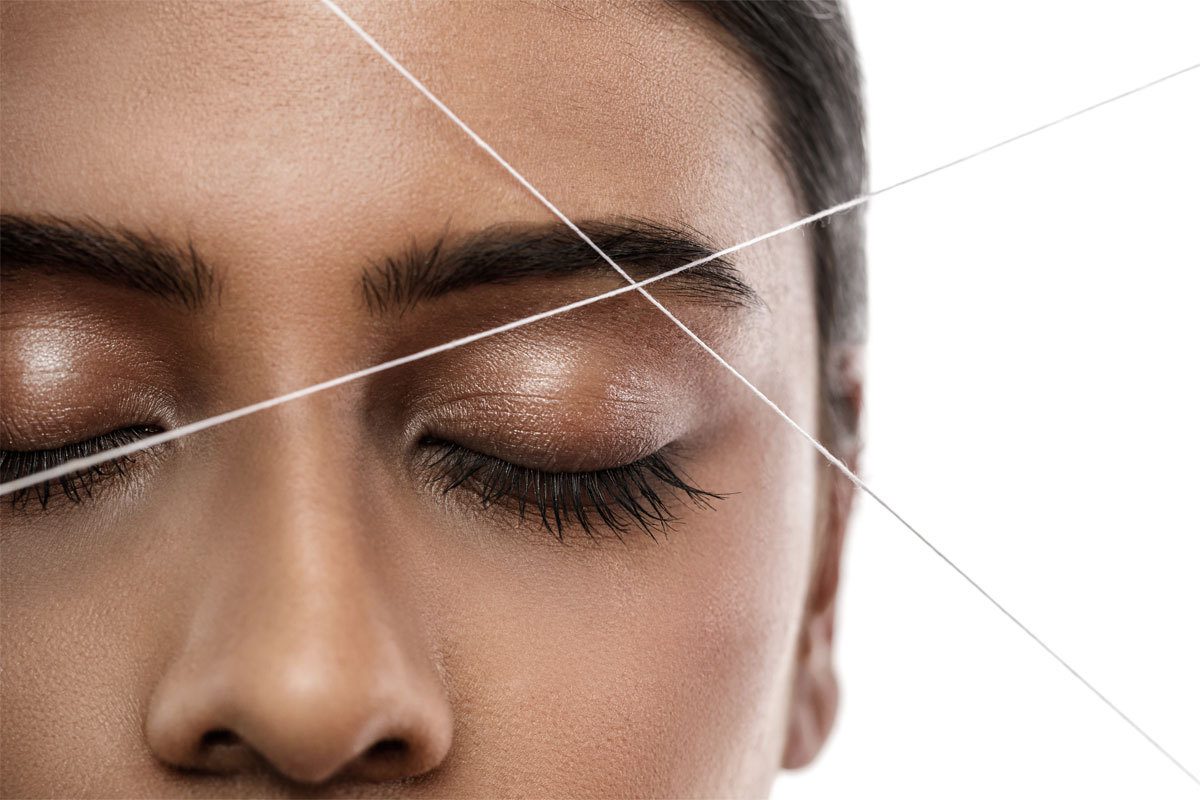 Eyebrow threading is one of the earliest forms of hair removal. More than 6,000 years old, it is growing in popularity in the United States—and WE KNOW WHY!

We ❤️ eyebrow threading. This quick and precise form of hair removal is less painful and more accurate than waxing and less invasive than chemicals or laser hair removal.  Even if you’re just looking for a respite from a world of tedious tweezing, it’s time to hop on board the threading train! 🚂

What Does it Mean to Thread Eyebrows?

Threading on eyebrows is performed with a cotton string  twisted into two strands. The brow professional arranges the strands then pulls them together to pick up and remove any hair in the line between the strands. Because this procedure removes hair from the root, results last up to 4 weeks.

Since threading doesn’t require the use of chemicals or potentially irritating products, like wax, we LOVE recommending it to those with sensitive skin!

Where Did Eyebrow Threading Come From?

Eyebrow threading is believed to have originated 6,000 years ago in the Middle East and South Asia. This hair removal practice did not gain popularity in the Western world until the 20th century. It especially took off in Western cultures during the 1920s as self-beautification became a form of liberation for women. 💪

In the 20th century, eyebrows became a POWERFUL part of a woman’s look, and threading was embraced as it allowed women to create a range of brow shapes, without wax or endless tweezing. The eyebrow evolution was on!

In Western cultures, eyebrow shaping is the most popular use of the threading technique. However, in many Middle Eastern cultures it has traditionally been used to remove hair throughout the face, such as the upper lip, cheeks and chin.

Threading in the Western World

Before threading was discovered and adopted by the West, Western women used tweezers, razors and wax for facial hair removal. Today, it has become one of our preferred methods for eyebrow shaping, as it’s faster than tweezing and plucking and can create a more precise shape than waxing.

While aesthetician training does not commonly include threading, technicians at The Lash Lounge are well trained in the accuracies of eyebrow threading. Our technicians are always excited to help you find what works for your brows.

The benefits of eyebrow threading are numerous. Our top three reasons to try threading?

Ready to build your new eyebrow look and routine? Between eyebrow tinting and threading, your brows are just one appointment away from perfection!

Our stylists are happy to walk you through the threading process and help you achieve FLAWLESSLY shaped and groomed eyebrows. Whether you’re new to threading or you’re a seasoned fan, The Lash Lounge is here for you!